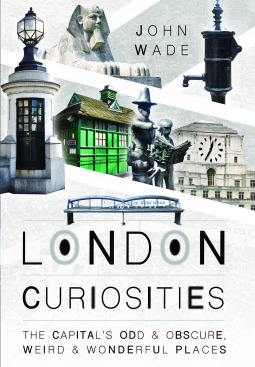 This is such a cool book!  Its a listing of all the odd left overs from buildings, bridges, or odd historical relics that have been left around the city of London.  The chapters break down various categories such as Clocks, Monuments and Memorials, Roman Remains, etc. Many of the objects in question are surrounded by myth, which are mentioned as well as the real history behind them.  For instance, there is a nose that is on a wall in Admiralty Arch.  There is a myth that the nose was from a statue of Nelson.  However, it was actually placed there by an artist and represented invasion of privacy.  There is both modern and ancient objects discussed all through this book.  I wish there was a book like this for various cities through the world!

London is full of curiosities. Who knew that beneath the Albert Memorial lies an undercroft resembling a church crypt? Or that there are catacombs under Camden? Who would expect to find a lighthouse in East London, sphinxes in South London, dummy houses in West London, or a huge bust of film director Alfred Hitchcock in North London?

How many of those who walk past Cleopatra’s Needle pause to consider why a 3,000-year-old Egyptian monument stands beside the Thames? How many know that what was once London’s smallest police station can be seen in Trafalgar Square? Or that pineapples are used in the architectural design of so many buildings? Or why there are memorials to the ‘Mayflower’ and Pilgrim Fathers in Rotherhithe?

These are just a few of the facets explored, described and illustrated here for anyone in search of the oddly obscure, wonderfully weird and surprisingly strange in this capital of curiosities.