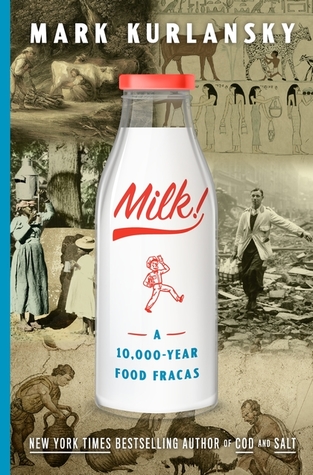 Thank you to NetGalley and Bloomsbury Publishing for this ARC.

We luxuriate in the richness of yummy butter, or at least I do. There is nothing more delicious to me than a simple croissant, flaky dough that has been laboriously layered with butter, and a cup of coffee.  But apparently in certain cultures, I would be called a “butter stinker”. It’s these little tid-bits that I enjoyed in Milk. Milk is a social history that ignites a thoughtful conversation for such a simple product. It follows the human ingenuity of sustenance and cultural arguments of use or disdain in all things related to milk.

Every aspect of milk is discussed: Uses, symbolism, cultural preferences and norms. There are 126 recipes, although they are not in the sense that I was thinking.  Some are not in recipe form, but often in parenthetical quotings on cheese making, or what have you. The recipes towards the end of the book sound really delicious, but some of these parenthetical ones in the rest of the book can get a little tedious.  However, it is quickly dispelled with lovely confectionery journeys like Italian Ice Cream in France, and then later the U.S., to lead us to African American Ice cream parlors in Philadelphia. By the by, I would love to see a book about just these Ice cream parlors in particular or the ice cream goddess Agnes Marshall  Somebody get on that.

The religious symbolism was of the most interest to me.  I was completely in the dark for a lot of this. Particularly the Christian symbolism and the changes as time progressed.  For example, how the milk of the Virgin Mary might be bestowed on the blessed, or the ceremonial blood of Christ was originally milk.  Also, the religious morality regarding breastfeeding was interesting.

The technology of keeping milk and the problems that arise are discussed as well as the later industrial changes in the milk industry. Refrigeration, canning, milk bottles, formula, condensed milk, pasteurization, milking machines, etc. are all mentioned.

This is the kind of book that is easily digestible. Milk is great for someone that is looking for an entry level book into history or non-fiction reading, but not boring to the more advanced reader. There is an immense amount of information in Milk that is touched upon and woven together.  I would love more detail on some of these topics and I think this is a good springboard for a curious reader.

On an odd note: I like milk, but as I was reading this I craved milk products more than normal. I went out of my way to find a local dairy that made fresh dairy products. I also craved ridiculous, fancy ice cream. And so, I blame this book for the extra cardio I had to endure.

According to the Greek creation myth, we are so much spilt milk; a splatter of the goddess Hera’s breast milk became our galaxy, the Milky Way. But while mother’s milk may be the essence of nourishment, it is the milk of other mammals that humans have cultivated ever since the domestication of animals more than 10,000 years ago, originally as a source of cheese, yogurt, kefir, and all manner of edible innovations that rendered lactose digestible, and then, when genetic mutation made some of us lactose-tolerant, milk itself.

Before the industrial revolution, it was common for families to keep dairy cows and produce their own milk. But during the nineteenth century mass production and urbanization made milk safety a leading issue of the day, with milk-borne illnesses a common cause of death. Pasteurization slowly became a legislative matter. And today milk is a test case in the most pressing issues in food politics, from industrial farming and animal rights to GMOs, the locavore movement, and advocates for raw milk, who controversially reject pasteurization.

Profoundly intertwined with human civilization, milk has a compelling and a surprisingly global story to tell, and historian Mark Kurlansky is the perfect person to tell it. Tracing the liquid’s diverse history from antiquity to the present, he details its curious and crucial role in cultural evolution, religion, nutrition, politics, and economics.