So, I got this book of Lovecraft as a gift.  It has 27 Lovecraft stories.  Look at it! Its beautiful! 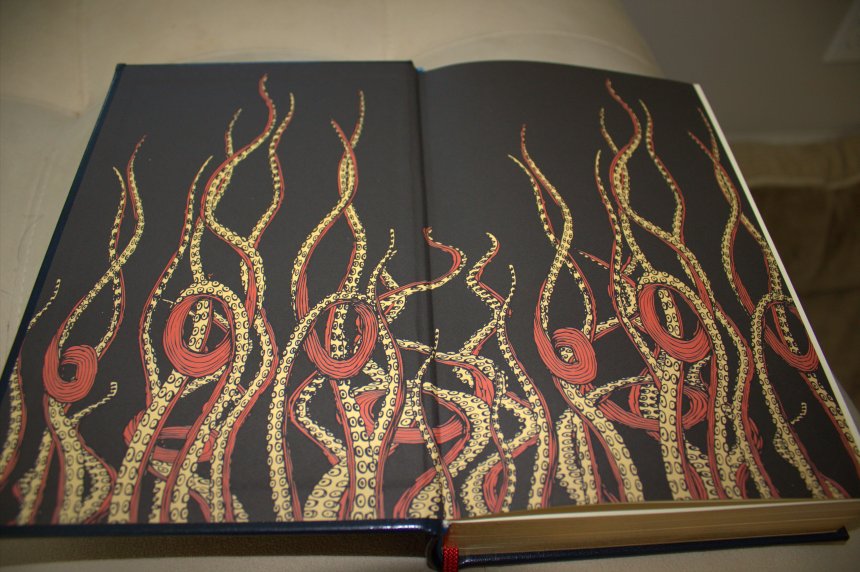 At The Mountains of Madness

At the Mountains of Madness is the second story I have read by Lovecraft. I feel like I have been living in a hole. Lovecraft does such a wonderful job of creating dramatic suspense and has a dark treasure seeking vibe that I adore. It’s too bad he was so horribly racist.

This story is a first hand account of a scientific exploration of the Antarctic. There are a few spots where it drones on. I don’t really need to know about every pick ax and flare you brought on the expedition, but it does give an air of authenticity. They come across an ancient city of unknown origins. There are detailed carvings that tell the story of their culture. However, they…uh, science it or something, and magically understand everything while they are looking at it. They quickly have a grasp of most of the cultural layout of the Old Ones, if not all of their civilization. This threw me, but I loved it anyway. I think this is why he is so good. Its his ability to create these elaborate origin stories.

As I was reading this I came across a sentence that gave me a full stop and a chuckle.

“On the barren shore, and on the lofty ice barrier in the background, myriads of grotesque penguins squawked and flapped their fins…”

Only Lovecraft could paint penguins as “grotesque”. I realize this is probably a little foreshadowing, but the last thought I have of penguins is creepy. I suppose they were unknown back then and perhaps an oddity, not the pop culturaI icon we snuggle up to and find so cute. I immediately thought of the penguin from Wallace and Gromit. You know, the one that framed Gromit.  Perhaps he is part of an ancient sect of penguins that served the “Old Ones”.